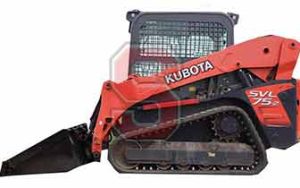 The following tables include a listing of the Kubota Svl75-2 specs. When review the table of Kubota Svl75-2, it is important to take into consideration the production year. The user's manuals provided by the manufacturer were consulted in order to ascertain the appropriate values for the Kubota Svl75-2's weight, lifting capability, and horsepower, among other technical specifications. Before you make a purchase, it is must that you verify the product's technical specs with the vendor. In order to assist you in making an informed buying decision, we will provide an Kubota Svl75-2 review as soon as feasible.

How much does a Kubota SVL75-2 weight?

How much weight can a Kubota SVL75-2 lift?

The Kubota SVL75-2 loader is intended for use in a variety of construction applications such as grading, loading, unloading, and landscaping. SVL75 2 is also suitable for other applications such as demolition, snow plowing, and trailer towing. Kubota SVL75 can transport up to 3,500 pounds of material at a time, making it ideal for small-scale construction projects such as residential homes or commercial buildings.

User Rating: Be the first one !